Transformational change by its very nature requires culture change.  In fact, most of us have heard the phrase: “culture eats strategy for breakfast.” Right? In other words, we can have the most logical, well-thought-out change strategy, but unless the culture (i.e., underlying norms and values) shifts in an organization to support a new way of operating and working together, the change will fail.

Popular wisdom often focuses on shifting culture first in an organization, but according to change guru and author John Kotter, “In a change effort, culture comes last, not first.”  He says that culture truly changes only when a new way of operating has been shown to succeed over time. 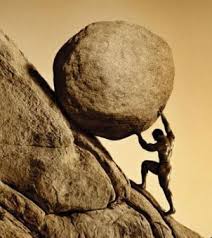 Trying to shift the norms and values before creating the new way of operating does not work. In fact, it will result in useless efforts and unending frustration. It can often feel like Sisyphus, from Greek mythology, who was sentenced to endlessly roll an enormous boulder up a steep hill only to watch it roll back down again.

So how can leaders avoid unending frustration and implement strategies that reinforce the new way of operating over time? Here are a few concrete ideas that Kotter shares from his book, The Heart of Change:

Kotter adds that “you can create new behaviors that reflect a desired culture. But those behaviors will not become norms, will not take hold, until the very end of the process.”

For me, understanding this fundamental aspect of organizational change that culture comes last, not first, is rather freeing. It helps me focus on what is doable to sustain change, rather than feeling immobilized by thinking that I have to implement culture change first. What do you think?

This entry was posted in change and transition, higher education and tagged culture change. Bookmark the permalink.

This site uses Akismet to reduce spam. Learn how your comment data is processed.